Unveil the wonders of Sri Lanka, where you’ll visit the Pinnawala Elephant Orphanage, world-renowned for its success in caring for and nurturing wild Asian elephants. See the rock fortress of Sigiriya, an archeological site built on top of a rocky mountain plateau, where you’ll tour its numerous ruins, including the Royal Palace and Lotus Bath. In Dambulla and Kandy, we admire the impressive temple complex—a shrine ornate with gold and fine woodwork. Travel by train through the scenic countryside to Nuwara to visit a tea garden and a nature walk.

Arrive at the Bandaranaike International Airport. Our local representative will meet you outside the customs gate and escort you to your hotel.

After breakfast, drive to Habarana; en-route, visit the Elephant Orphanage in Pinnawela, a breeding ground to care for and protect wild Asian elephants. The sanctuary covers 25 acres of lush vegetation with a population of more than 90 elephants. We arrive at Habarana in the late afternoon with the evening at leisure.

In the morning, we head to Matale District of the Central Province to visit the Sigiriya Rock Fortress – one of the world’s most dramatic, inspiring, and beautiful historic locations. It was built in the 5th century A.D. by the king, Kashyapa, as a fortress-palace. The Aukana Buddha is the most magnificent and well-preserved ancient image on the island. Constructed in the 5th Century B.C., during King Dhatusena, it stands at 42.5 feet high, underneath a recently built brick shelter said to be a reconstruction of an image house that contained it 1,000 years ago. We continue to the ancient city of Polonnaruwa, the medieval capital and the crown jewel of King Parakramabahu I. It remains evident of ancient culture and heritage blended with religious beliefs. Walk across its scattered walls of the World Heritage Site – blessed by stupas, resting Buddha statues, irrigation canals, and fantastically carved Hindu sculptures – while observing the relic house – Watadage – which boasts of beautiful stone carvings. Take a close glance, and you will realize a subtle Hindu influence on architecture and statues found in Polonnaruwa. Or sit by the side of Galviharaya and observe the absolute beauty gushing out of every bend of its giant Buddhist statues. Nissankamalla Council Chamber is a head-spinning beauty to sit back and watch its swaying pillars, reminding the aesthetics of a powerful kingdom beside Parakrama Samudraya – a sea of Parakramabahu and masterpiece of irrigation! After the full-day excursion, return to your hotel in Habarana.

After breakfast, drive to Dambulla, noted for the five cave Temples on a rock. The caves, built at the base of 492 feet high rock, dating back to 1st C.B.C. All the five cave walls and ceilings are covered with Buddhist murals, and more than 130 Buddha statues, statues of gods, and Kings are also found here. Continue the drive to Kandy, stop at Matale, known for producing tea, spices, vegetables, and rubber. We will visit a spice garden and learn about fragrant clove, cinnamon, cardamom, nutmeg, mace and pepper, and many other favorites before heading to Kandy, Sri Lanka’s second-largest city in the island’s mountainous center.

Kandy is known as the cultural capital of Sri Lanka and was declared a world heritage site by UNESCO in 1988. Visit the Temple of the Sacred Tooth Relic. A sacred tooth relic of the Lord Buddha was brought to Sri Lanka in the 4th Century A.D. and enshrined within the Dalada Maligawa, or the Temple of the Tooth. This sacred relic has been the symbol of sovereignty for the Sinhalese kings and always enshrined in great splendor. Kandy’s Dalada Maligawa is a magnificent shrine with decorative walls, a golden roof, and fine woodwork. Continue our visit to Peradeniya Royal Botanical Garden, first built as a pleasure garden by a Sinhala king and was expanded by the British. It is 147 acres in extent and provides a fantastic variety of trees, plants, and flowers. In the evening, witness a cultural show featuring traditional Sri Lankan music and drumming.

This morning we will take a train ride to Nanu Oya. Misty steep roads, twisting through lush green blankets of tea bushes in a cool climate, remind visitors that they are within the range of the renowned British colonial retreat, Nuwara Eliya. Augmented by an English countryside atmosphere, the city of light – once governed by English & Scottish planters – is still studded with colonial bungalows, hedgerows, and one of the finest 18-hole golf courses in the world. A hike through the green grass and red-brick walls should present breath-taking views of a buzzing countryside hamlet. Visit a tea plantation en route. Take a tour to the cold and misty hills that take pride in an ultimate tea tour, covering lush green blankets of tea plantations. Or step into a tea factory processing the prestigious brand of Ceylon Tea to observe a rich tradition kept alive up to date. As you watch the hissing and swishing of machines, inhaling the heavenly scent arising from these facilities, make sure to end your day in style over a perfectly blended cup of pure Ceylon Tea.

Early morning leave for Horton Plains with packed breakfast. Horton Plains, a UNESCO World Heritage Site and Eco-tourism hideout in the heart of the isle, painted with unending stretches of green pastures, marks one of the healthiest wet montane evergreen forests in Sri Lanka. With an altitude above 7000 feet, the plateau sweeps 7,830 acres, sheltering flora and fauna varieties that only can find here. As the tributary of Belihul Oya – Bakers Falls – thunders down rocks head off the beaten track – across frost-covered grass – to feel the icy-cold wind against your face. You may even gaze down World’s End, a head-spinning 3,700 feet drop towards the Southern end, or drive carefully through herds of sambar deer, shy to human touch and birdlife chirping across the plains. You may also spot grunting wild boars, pouncing fishing cats, otters, or even the Sri Lankan Leopards! Return to the hotel after the excursion.

This morning drive to Colombo. We will have a Colombo city tour before boarding our onward flight if time permits.

Prices listed are per person, based on double occupancy, and subject to availability. This is a land-only package without International airfare. Tour prices include hotel taxes and service charges. (LO/031522/C-10) 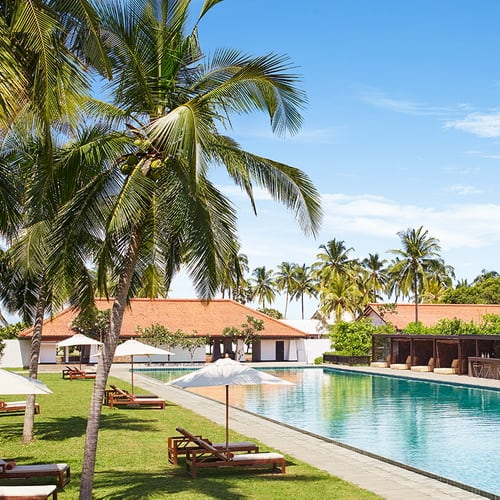 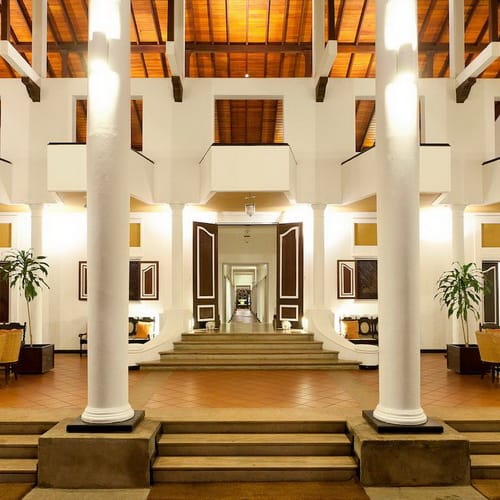 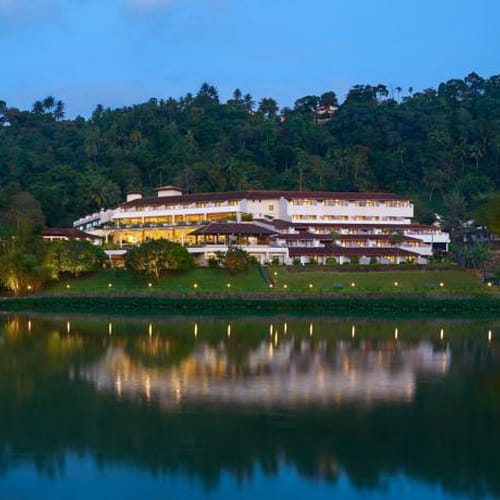 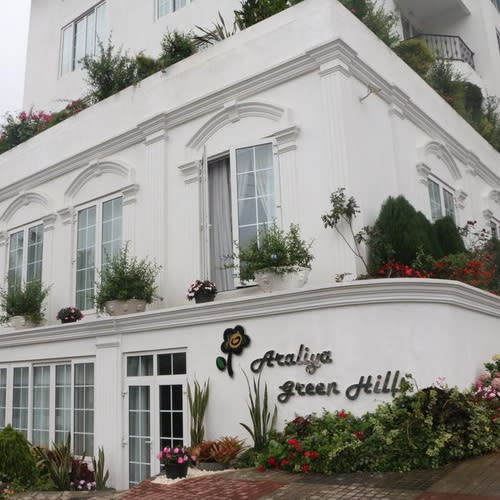 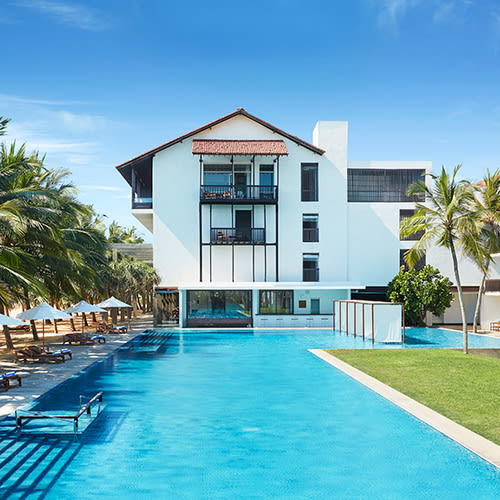 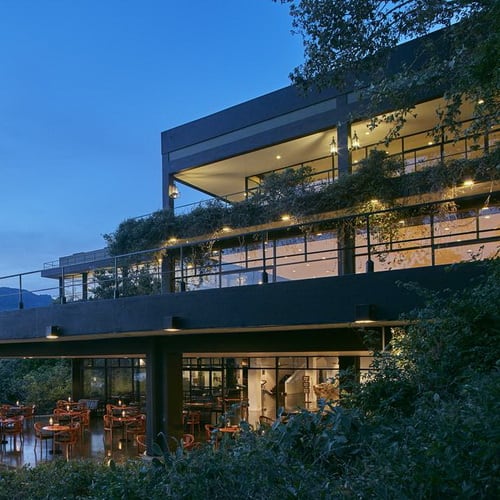 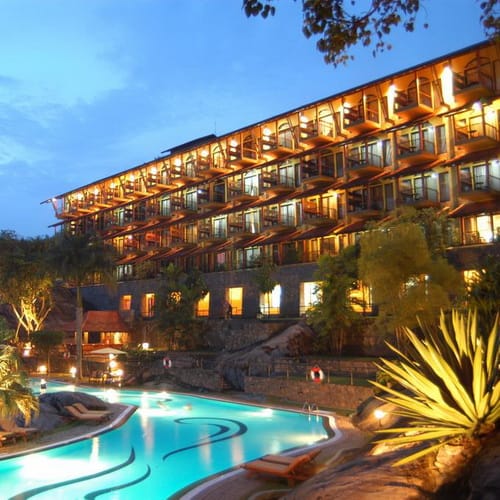 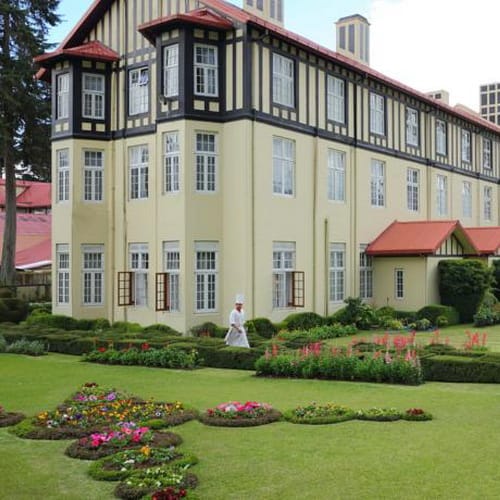